I went to see James the physio this week. He pronounced himself happy with the weight progression I’ve been achieving in my rehab work, and after quizzing me about pain levels and the like, declared my achilles well on the mend. I was angling to add a 4th run back into the weekly schedule, he agreed I could ease that back in. That leaves the two short recovery runs, typically 5-6km and never more than 8km which we agreed should stay on the cross-trainer, certainly for now and perhaps for the duration. His view was that they don’t serve any endurance training purpose and are there to get the juices flowing, easily achieved in low-impact fashion. This leaves me with the Sunday long run, the quality session and two medium length runs, usually 10-13km. I’m happy with that.

Here is how my week unfolded.

Tuesday – The plan says long hill repeats but the physio says “no hills for you sir”. I made the best fist I could of the hills, with high resistance and greater oomph mimicking the uphills, light resistance and slow turns filling in for the downhills. It’s not the same, but it’ll have to do. After the “hills”, I got the leg rehab work done, plus a core and posterior chain sesh.

Wednesday – Plan had me doing 6.4km, a mid week loosener. Gym-bound again, I did this on the pesky cross-trainer.

Thursday – Planned, 11.2km. Runch, 11.2km. Thursday Runch has become something of an institution, I have 90 minutes blocked out in my calendar for it for the rest of the year. It’s just enough to get changed, run, stretch, shower and change again. I work in Richmond with the Thames close by, so an out-and-back along the Thames Path is my usual route. It was mild and sunny, rather unseasonable weather, but we timed it well. It absolutely threw it down not an hour later. I had to pace it out the last kilometre or so as (at the risk of sharing too much information) I needed to peg it back to the office to deal with an urgent toilet situation – I was not ready to execute a wild shit on the tow-path. Maybe I should have, with the distances I’ll be running later this year, I may need the practice! I popped to the gym later on to bash out the obligatory leg and core sesh.

Friday – Plan says 11.2km, physio says “oh alright then, but only half, mind!”. I did the first 5.6km on the treadmill then the rest on the cross-trainer. One more week of that then I’ll be unleashed on the unsuspecting Friday morning dog-walkers of Caversham. Looking forward to it!

Sunday – A light week in the plan this week, so the long run was relatively modest at 12.9km, 8 miles in old money. I have a local loop which is exactly 12.9km door to door, most satisfying. It was chucking it down when I went out but the sun soon came out, leaving me steaming gently in the breeze. I am now used to running at 170 cadence, and can even sort-of maintain a reasonable 5:50 pace while doing it, but I can’t do it without the metronome app giving me the beat. I regress back to more like 165 without it. This week I realised that my watch must know what cadence I’m running at, not least because it gives me a nice chart at the end of the run. I found a display setting which includes pace, distance, time and cadence. Perfect. That should help me wean myself off the metronome.

So, that was the week that was. One week closer to my first marathon and I’m more or less sticking to the plan.

In other news, I have a couple of races in the lead up to Brighton. I got the first race pack in the post the other day, for the 10k in London on 9th February. I’ve been so focused on the longer distances that I haven’t given much thought to this one. I’m not sure if I’ll try for a pb, or just cruise it. More pondering required. 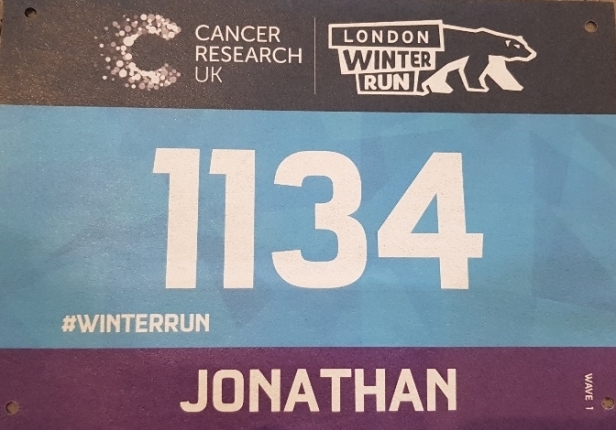 I’ll be back next week for another training update, including what should be a record distance for me on the LSR.

This blog tracks my progress through the weekly slog of training for various events. I was disgruntled to find myself in the “Veteran” category at my first half-marathon a few years ago, hence the “unwilling” in the title. On this blog I will be musing about aches and pains, training plans, PBs, progress, the mystical state of flow and the like.